Leslie was born in London in 1948. He studied painting at Hornsey College of Art and Maidstone College in Kent before going on to study for a Masters Degree in Fine Art at the Royal Academy Schools in London (1972-5). During his time as a student there he began to paint the garden subjects which have formed the basis of his work ever since.

After graduating Leslie worked with various galleries and regularly exhibited at the Royal Academy Summer Exhibition. He was offered a one-man show at the King Street Gallery in 1980. The paintings for this exhibition were all of imaginary gardens.

Two more exhibitions followed, shown at Douwes Fine Art in London (1987)  and Amsterdam (1994). These exhibitions featured paintings of actual gardens. National Trust gardens and Dutch Country Houses and Gardens respectively. A further exhibition in The Netherlands followed at Galerie Renoir in Maastricht in 1997.

Leslie now works directly with customers on private commissions. His pictures have been reproduced on greetings cards, calendars, diaries, CD covers and as prints. 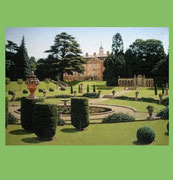